No Does NOT Mean Convince Me

A Miseducation Episode in the Art of Persuasion

In an effort to make more space on my iPhone, I am always trying to find pictures, memes, and whatever else I don’t need, so it can be deleted. Scrolling through all saved, but forgotten posts on Instagram, there was a SlutWalk post with someone holding a sign that read “No does not mean convince me.”

do NOT try to convince me

When I first saw this, it struck me how powerful and true this statement is. It eventually reminded me of a recent situation where I wish I remembered to say it.

So I was spending time with a friend after returning from a healing sound bath. I expected to drink a beer, vape some cannabis, and chill for a bit before going home. I definitely knew there would be some physical attention happening and felt excited about receiving some affection.

We took some time catching up, talked about plans for the holidays, and I watched him dance around the room as if he were at his own club. He was so giddy and relaxed; a side of him that I hadn’t experienced. Apparently, tequila. Not sure how many times I told him he looked cute and ridiculously funny. I decided not to have any, because I don’t like tequila and I wanted to drink some wine at home to ease my cramps.

When we finally got around to the affection portion of the evening, I was excited. The way he kisses me and plays with my hair makes me feel like a goddess. Just so he doesn’t use it against me, I’ve never told him that the way his fingers appreciate every cell of my epidermis reminds me of the definition of my name. This is exactly what I’ve been waiting for all damn night.

Skipping all the salacious deets, he wants to have sex. I say no. He knows that I just started my period earlier in the day. I tell him no.

A cloud of the tinny, very distinct I-am-shedding-my-inner-lining-and-am-really-not-trying-to-expose-you-to-this smell is exposed as he attempted to pull down my pants.

Pushing back all the memories and waves of heat which accompany symptoms of my anxiety that are fighting to surface simultaneously, I remind myself that he is not them, he is not trying to hurt me.

He settles down and is okay with my decision, but is disappointed. I didn’t tell him that I feel the same and go home.

I simply didn’t want to (insert any multitude of reasons here; all of them are valid). Although this situation proved to be enough on its own, I do not continue to engage with him at all for other reasons and certainly have not seen him since that night.

There isn’t any single thing to defend or attempt to validate from either of our perspectives about that night. I simply realized how much more impact my saying no could have been, if I had followed it with, “No does not mean convince me.” 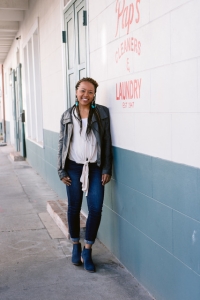