Jemila is a middle school English and ancient history teacher in Los Angeles.  It is not the glamourous career she had hoped to snag, but she work diligently and has a crazy work ethic. She loves seeing her former students off to college and beyond. Herself a perpetual student, Jemila is often reading and writing, while swearing off the evils of television. Writing has long been a part of her life, which she uses to share her good, horrible, and comical life experiences with anyone brave enough to listen. In order to remain balanced, she runs half-marathons, enjoys crafting (greeting cards and calendar decoration), and creating DIY beauty & hair products.  Born in Ohio and raised in Pasadena, California, she is no longer the very shy girl with glasses. 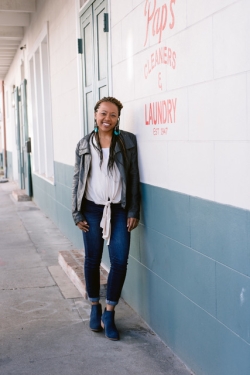 I’m probably ten steps away from my porch, a man calls out to gain my attention. “I like your colors,” complimenting my turquoise tights and heather grey work out tank.

He starts talking about a Kobe memorial at the forum. Said it wasn’t great and had one cheap balloon.

I politely engage with a short sigh and “oh”, but remain focused on getting to the gym.

He turns around and walks toward me as I cross the alley, and he steps uncomfortably close asking for a hug.

Dec 25, 2019 by Jemila Pratt
I've long asked myself "who are you? and where do you come from"? More often I've stared and stared at every pore, scarf, and mole on my body trying to understand myself.

When I look in the mirror, I see curvature in my lips, uneven eyes, and skin decorated in beauty marks and scars. Underneath is a woman.

Today I am happy. The process to get here has been sidetracked by woes of growing up, sexual trauma, yet overcoming these obstacles and pit stops to become my most authentic self.


Several times I have attempted to write about my identity. It is something with which I have struggled with since at least the 1st grade.

Watched Lacey's doc and empathized. There were parts...
Read More

Kemetic Yoga (KY will be used as an abbreviation), which focuses on principals of the ancient Egyptian system of deep breathing, physical movement based on geometric postures, and mediation. It has begun to surge in popularity and interest again, but was developed in the 1970s.  KY is derived from sages of Ancient Kemet and has several principles that include the ideas of vibration, gender, and rhythm. The postures are based on different gods and goddesses. For example, Neteru represents cycles of nature, Auset is undconditional love, Maat symbolizes balance and compassion (Maat Ka sequence).

At the end of May this year, I attended a Maat Ka class at The Tree South LA. The instructor, Lauren (Anu) Wolley Ross, got her start in...
Read More

I didn’t write much about how my emotions dipped from positive, hopeful, and content to doubtful and bleak during July. Some of that time I spent denying it, conversely questioning what the hell happened. There was fear that depression would gain hold and that felt even more disappointing.

The main changes I noted happened after the onset of my menses.  For several weeks, I hadn’t been drinking enough water each day nor taking ashwagandha regularly, which may have contributed to a lull and difficult cycle. This particular episode gifted me with days of pain and roller coaster emotions and easily claiming the title of “One of the Worst Periods I’ve Had in a Long Time.” Simultaneously, a...
Read More

Aug 01, 2019 by Jemila Pratt
July proved to be a tough emotional month and I’ve engaged in some light reflection as to why issues are cropping up.  Despite these low emotions, I encouraged-dragged myself to attend a poetry at Underground Museumon a Sunday afternoon. I’d missed several other events hosted by The Free Black Women’s Library (FBWL) and couldn’t bear yet another. If you are new to this cool library, it is a mobile trading library comprised of books written by Black women and it's free! Started by OlaRonke Akinmowo in 2015, the library celebrates Black women in literature.

A generously warm and beaming sun lit the day and helped brighten my perspective. Besides, I love poetry and the last reading I attended has long been forgotten.